The Light at the End of The Tunnel May be a Train : The Journey

In 2011 a Canberra journalistI interviewed me after I was awarded Psychic of the Year (ACT). I often look back at that time as eventful. I wasn’t necessarily eventful from the Psychic of the year award. Although I was very chuffed and it was a great honour. There were greater things happening behind the scenes which reminded me about trains and the light at the end of the tunnel.

The ‘Light’ I’m referring to was a woman who I had never met. As things progressed I realised I would be talking to her many times over the next 18 months. All the conversations were over the phone.

It all came about after my award because I was interviewed by a journalist about what I do. My psychic work pricked up the journalists interest especially for her sister who lived in Melbourne, The journalist asked me about whether her sister would ever have children.

That interview and subsequent discussion with the journalist started construction of an intriguing web. It was a web of frustration, drama-glue and stress for her sister who’s life changed dramatically. She would later have an affair, divorce, change jobs, and move interstate to be with her new lover. Later, she would have a baby. 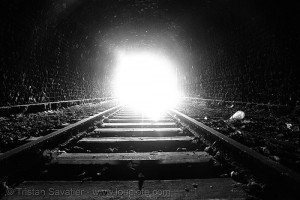 It became the journey for this woman. It was the journey the woman had to take and believe me, it wasn’t easy for her. Her rewards were to be colossal especially if she believed in herself and stayed on her game plan.

She had been to see a string of doctors and specialists who told her she would never be able to have a child by natural birth. She received this news after a lengthy IVF program to become, in a short time, fertile by natural means.

Could this be your story, how would you write it?

Check out what wikipedia said here

Hanging Squirrel : Being Consistent : Being Persistent